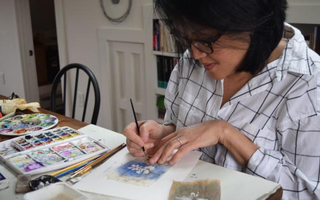 Ruby Silvious is internationally recognized for her miniature paintings and collages on the used tea bag. On January 3, 2015, she started a project called 363 Days of Tea, a visual daily record of her impression of the moment, using the emptied-out tea bag as her canvas, and altering it to create a new work of art every day for 363 days. She draws, paints, prints and collages moody, evocative and sometimes whimsical art on used teabag paper. She is the author of 363 Days of Tea: A Visual Journal on Used Teabags (Mascot Books, 2016), and Reclaimed Canvas: Reimagining the Familiar (Mascot Books, 2019). In her second book, Ruby wants viewers to keep an open mind and think beyond the boundaries of what they may consider traditional art.

Her paintings on tea bags, some inspired by her travels around the world, have been featured in numerous publications including CNN Travel, The Guardian, Der Spiegel, North American Review, Good Morning America/ABC News, and the internationally syndicated Ripley’s Believe it or Not. Silvious was educated in the U.S. and Asia; she currently lives and works in New York’s Hudson Valley. Her art is exhibited internationally, and is featured in public and private collections.

Most recent international exhibitions
Silvious' most recent exhibition, The Art of Tea und Sonstiges at the Künstlerhaus Hooksiel in Wangerland, Germany ran from Jun-August, 2021. As the gallery's 2021 recipient of their annual scholarship grant, her work was featured in numerous publications in Northern Germany. In March 2019, Silvious' art was featured in a solo exhibit at Creative Space Hayashi in Chigasaki, Nakagawa Prefecture, Japan. Later that year, she attended and exhibited at Mudhouse Residency in Agios Ioannis, Greece, as a result of a culturally immersive art residency program.

2020  Recycled and Refashioned: The Art of Ruby Silvious

2021  The Art of Seed, Walkill River School of Art

No images may be copied or used for any purpose without consent of the artist.